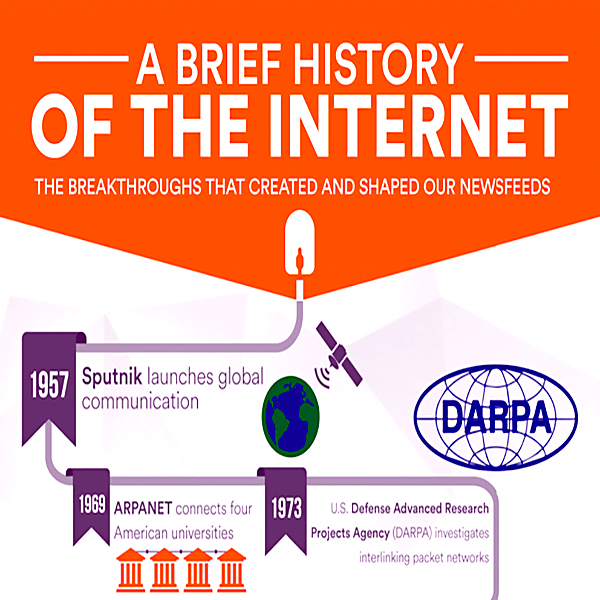 The Internet At Forty

On October 29 1969 the Internet, as we know it today, was created. It was on that day that the Pentagon’s Advanced Research Projects Agency(ARPA)sent it’s first message between UCLA and Stanford. The first message was to be: “login”, but the link crashed after “o”; creating a rather inauspicious precursor to the modern email message. Despite a rather dismal birthing process, Arpanet came into existence. As a side note, Unix,(the OS that a good chunk of the Internet runs on),was also developed in 1969.

Not much happened in 1970 as far as Internet progress, but 1971 saw two developments that were monumental. True email, complete with the now ubiquitous “@”, was created by Ray Tomlinson of BBN. The second big “advancement” was the world’s first known computer virus. “I’m the creeper, catch me if you can” copied itself to various Arpanet computers and set the precedent for what has becomes one of the many banes of modern digital life.

The next few years were rather uneventful.In 1973, 75% of all Arpanet traffic was email. In 1975, Xerox files a patent for ethernet technology. In 1976, Queen Elizabeth became the first head of state to send an email.

1977 was a landmark year in more ways than one. Besides the death of “The King”, ‘77 saw the introduction of the Apple II and the PC modem; two devices that have drastically changed our way of life. Compuserve, the grandfather of Google, came into existence to serve the ever-growing on-line community precipitated by these two items.

The next couple years saw minor tweaks being made in the cyber world. 1978 saw the refinement of TCP/IP and the first known instance of “spam”. 1979 saw the introduction of Usenet; a bulletin board on steroids and the prototype for many on-line services that were to follow. (Incidentally, 1979 also saw the baptism of the Sony Walkman.) 1980 was a non-event. The new toy that year was Pacman. In 1981, the first American newspapers were available on-line. An average daily edition took two hours to download. With Compuserve charging $5 an hour, reading a paper not only strained your patience, but also your wallet. The two big debuts in 1982 were the emoticons 🙂 and freeware; software freely distributed among computer users. 1984 was not quite the nightmare that Orwell envisioned. Instead, we had the domain name system introduced and the term “cyberspace” was launched into…….cyberspace. In 1985, the first “.com” domain is granted to Symbolics. (Note: Microsoft.com is not registered until 1991.) The number of hosts on-line now stands at a whopping 1961; a considerable increase over the 1975 number of 62.

Once again, we hit a small lull in Internet development. However, there are a few things worth noting. In1988 the National Science Foundation upgrades it’s network and essentially becomes the link between Arpanet and what is now the Internet. In 1989 AOL is morphed from Applelink and launches a short lived dynasty. (Does anyone use those guys anymore?)

I don’t want to use the word “monumental” too much, but 1991 saw the emergence of Gopher,(the first browser…sort of. Don’t quote me on this, but I think my homeboys from the University of Illinois developed Mosaic first.) and the adoption of the MP3 standard-both pivotal events in the annals of the Internet. The number of hosts now stands at 617k.

1992 and 1993 were non-events. Netscape,( the first extremely user friendly browser), and sex.com are both launched in 1994. Netscape was eventually eclipsed by big M and has faded into obscurity. Sex.com..well, it’s still there. I just checked. It’s not as risqué as one would expect from the name. I’ve seen much “worse”.

In 1995 Netscape introduces SSl; and it’s IPO that year is considered the beginning of the .com bubble. What else is notable? Well, let’s see. Amazon, Geocities, and the Vatican all launch sites, but these pale in comparison to the launch of tit.com. The number of hosts on-line now stands at 6.7m

Craigslist, Hotmail and Altavista are all formed in ‘96. The word “weblog” is first coined in ‘97. Google is born in 1998 and we now have 36m hosts on the net. The times- they are a changin; and damn fast now. In 1999 the RSS format is launched and there is now over 52m hosts on the web. 2000 saw the” ILOVEYOU” virus.( Talk about a “fatal attraction”—this virus was one of the most destructive in the history of computing.) 2001 saw the launch of Wikipedia.The number of hosts is now above 125m In the two years between 1999 and 2001, the amount of hosts on-line has more than doubled. The Internet has come of age.

2002 was another “non-event”. 2003 witnessed the launch of Skype and MySpace. 2004 saw the introduction of Gmail and Firefox; both products hoping to compete in arenas heavily controlled by Microsoft. Youtube streamed it’s first video in 2005; and to quote an overused expression: “the rest is history”. Twitter services are offered for the first time in 2006. Three years later, it is now a staple of American society. As of July 2009, the estimated number of hosts on the Internet now stands at over 600m.

We now have a President and staff that are fairly cyber savvy. Mr Obama raised approximately $600m for his campaign by using the Internet. This was not done through clever, Flash embedded websites, but through social networks like Facebook. The Internet has forever changed the way we elect our officials, the way we communicate, the way we shop, the way we learn…..hell, it’s changed practically everything.

What does the future hold? If you can imagine it, it will probably happen in five years. If you can’t, it may take ten. Personally, I see most apps migrating to the cloud; opening miniaturization of devices to a whole new level. I can almost guess what UI(user interface) may evolved into. If I’m right, there’s some pretty cool shit down the pike.