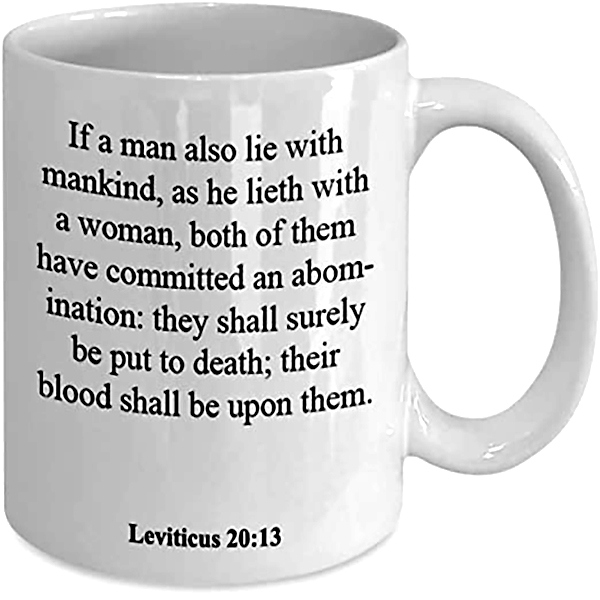 With it’s increasing acceptance by a large segment of our society, the issue of homosexuality has put many of us in sort of cognitive dissonance. I find myself in that group. One part of me believes that the freedom to pick one’s sexual partner, (providing that they are of legal age), should not be impeded by any social or legal restraints. Another part of me feels that it is wrong; that not only is it against God, it is against nature. God, mother nature, evolution-whatever you believe in-seems to have had a plan when men were given a penis and women were given a vagina. They are pieces of a puzzle that fit together perfectly. Why put a square peg in a round hole?

I consider myself a Christian, (albeit not a very good one), but am by no means a bible thumper. However, I have read the book on several occasions and it is very clear on the subject of “alternative lifestyles”. Leviticus 20:13 states: “If a man also lie with mankind, as he lieth with a woman, both of them have committed an abomination: they shall surely be put to death; their blood shall be upon them”. Serious dissonance occurred when I first read that. I’ve met some fine people who just happened to be gay. Hell, half of Hollywood seems to be homosexual these days.

Whether one is born with this disposition or has acquired it is a topic I’m not conflicted about. I believe it is learned behavior. I once had a serious argument with someone on this point. They insisted that they were gay from the moment of conception. I obviously disagreed.

Undoubtedly, this essay will piss off a few people. I make no apologies. We live in a society that very effectively blurs the line between moral and immoral behavior. You sometimes have to take an unpopular stand.